As companies craft their return-to-work strategies after Covid-19, experts and surveys show many are settling on a hybrid model that includes work-from-home flexibility.

But that new workplace dynamic is also shaping lease negotiations in commercial real estate, as companies reassess the purpose and size of their offices.

Benjamin Osgood is seeing it firsthand. He is founder and managing director at San Francisco-based Recreate Commercial Real Estate, which focuses on tenant representation in California’s Bay Area.

Osgood said leasing activity is recovering at a faster pace than many anticipated, but he said some clear trends are emerging that offer lessons for companies that are negotiating leases for a post-Covid-19 world.

Recreate Commercial Real Estate is working with clients to survey workers, and they are finding the majority of employees want to work from the office at least one day a week — a figure in line with the preference for a hybrid model found in other surveys.

While many companies assume those hybrid models will equate to a smaller office, Osgood and other experts say that’s not always the case, and they suggest companies ask themselves several questions before negotiating their next lease.

For companies that are moving to a hybrid model and considering reducing their space, Osgood encourages them to consider why they are contemplating that step.

Getting to the heart of those questions will provide a helpful roadmap, Osgood said. Then they need to get to the “why” of the office itself.

For many companies, moving to a hybrid model means getting away from using the office for traditional “head-down” cubicle work.

“We’ve learned we can do that anywhere,” Osgood said. “But what you can’t do anywhere is collaborate, foster those ideas and have those sparks fly.”

For some companies, that’s actually resulting in more square footage per employee because spaces are changing to become more collaborative.

In others, it might be more of a zero-sum game, where a tenant eliminates a number of high-density spaces but adds larger collaborative spaces and keeps the total square footage of the lease about the same.

In the markets Recreate Commercial Real Estate serves, Osgood said prevailing sentiments about remote work have evolved over the past year.

Early on, many survey respondents said they wanted to work from home permanently. As time passed, more favored the hybrid model.

Osgood said employers would be wise to plan for a continued evolution of that thinking.

“I think frequency is going to increase as time goes on,” he said. “You don’t want to plan for an office with 20% occupancy when it might be 70% by the end of the year.”

Osgood said there have already been examples of companies that downsized their spaces because of the initial remote-work shift who have changed their minds. It’s showing up in sublease activity. 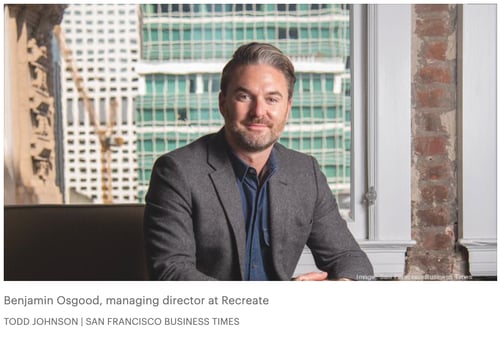 “One of the trends emerging right now is subleases are coming off the market not because they’re getting rented, but because the company has changed course,” Osgood said.

Should you have a pandemic clause?

One consequence of Covid-19 is more companies are taking a close look at various clauses in their leases that could provide benefits in the event of another pandemic.

Maria V. Bernstein, a real estate attorney at San Francisco-based SSL Law Firm LLP, believes there will be more discussion around condemnation and force majeure or unforeseen circumstances clauses in the years to come.

Bernstein said condemnation clauses often say that if there is a “taking” by a government, then the lease is automatically terminated.

She expects those clauses to be scrutinized in future negotiations.

"The narrower the better for tenants, but in negotiating leases, the broader the better," Bernstein said. "Since we don’t have crystal balls, this is something that probably won’t change in lease negotiations, but landlords can take comfort when granting broad-use rights that this may ultimately benefit them should we face future catastrophes that lead to the type of government-mandated shutdowns we have just seen."

Osgood said more tenants are negotiating those clauses into leases.

“We are now building into our leases that if the state or city order says you can’t walk through those doors anymore, you automatically have some type of rent deferral or abatement,” Osgood said. “People should be negotiating that type of clause into their lease, because this could happen again.”

How can you use your leverage?

Osgood said the pendulum of leverage has swung back, temporarily, in favor of the tenant.

That means now is the time companies should be negotiating more flexibility into their leases.

Osgood said companies that foresee potential to grow should look at building in rights of first offers into their lease that would allow them to expand into adjacent spaces as they grow.

Companies that anticipate a need to downsize could also negotiate the ability to move to a smaller space in the same property or the landlord's portfolio without penalty.

“Would that happen in a landlord-centric market? Not a chance,” Osgood said. “But right now is the time when tenants need to puff their chests up and really understand how much leverage they have.”

This article was originally published in The Business Journals on May 14, 2021.